In our leadership teachings, we introduced a sequence of success.  Some things follow a proper order; though as we all know, there are always exceptions.

The process is not deep and intellectually challenging—-in fact, it’s simplicity is most of it’s power—-which baffles some.

Here it is:  THINK, PLAN, DO.  Ponder this while I briefly explain.

Successful plans need to be incubated.  My son-in-law(Andrew) took this literally.  He and my daughter and cute young grandson are fashioning a plan to be sustainable farmers.  They are incubating this plan as they save their money toward a purchase—-in our basement.  We are happy to assist.  What I didn’t know when this started, is that we would have six chickens and twenty one quail in the basement also.  The quail were carefully incubated.  I might have seen this coming had I put two and two together.   Andrew built a beautiful mobile chicken coop in our garage a month or so prior—-which displaced my wife’s car during construction .  Did I mention we love helping?  There is more!

Our HOA has a policy against chickens/chicken coops.  Our city does not.  My wife is the HOA president—-and deals with “HOA career people neighbors” who make neighborhood patrol their occupation.  She came home from the last board meeting where Andrew “floated the chicken plan” and said something like “go for it”—- I said it was “something” like that …..(it could have been our interpretation onlyJ, and we didn’t seek clarification).  It was determined that before the HOA would get around to hauling our little chicken butts into HOA court, the little birds would have been fully grown and tested in the new mobile coop etc..  I hope our interpretation doesn’t get our HOA President into trouble!  Sometimes even the “Thinking” aspect of this formula requires risk.

BTW, to show my HOA appreciation,  I’ve ordered a life-size fake cow for our front yard—-but I digress.

Thinking is akin to incubation.  These quail running around our basement didn’t just appear.  They were carefully placed on egg holders that moved periodically; were kept at a perfect temperature, and then one early morning, the eggs cracked and out came little fuzzy creatures.

The thinking puts in motion, the plan.

The research that has gone into our little neighborhood farm is amazing .  Andrew is a lot like Leonardo Da Vinci—-taking meticulous notes–preparing for the best possible results.  twenty two quail hatched from 30 eggs, and 21 survived.  For any quail hatchers out there, you know this is a record feat!

The chicken coop the birds will graduate to in a week or so is not just another coop.  In fact, we are patenting it—–that’s what happens with GREAT planning—-the world is changed for the better—in this case the chickens will live a life of happiness—-until that fateful day.  Seriously, a big part of sustainable farming is to be a good steward of the earth and its creatures—-this is all incorporated in his plan.  Which leads us to DO.

While I was still reeling (with curious excitement) from the covey of quail and peep of chickens in our basement, Andrew constructed a green house in our yard.  He put a camouflage electric netting fence around this and the garden area—I’m not worried about the HOA on this one because they can’t see it!  he also ordered bees— which were placed in his hive last week.  Andrews good wife got him a hive for Christmas!  I didn’t think it would be launched in our back yard—but having watched the BEE MOVIE,  I know that bees are our friends—-so what the heck.

The massive winter spring snow you see in these pictures was NOT planned for; but because the THINK part of the plan was so meticulous, the Bee’s survived, the greenhouse withstood the pressures of the snow, and the birds were delayed their new home, but thrived none-the-less. 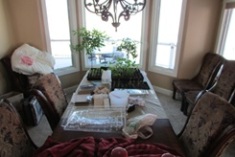 The greenhouse, though now constructed, needs preparation for these starts to be transferred—-FROM OUR DINING ROOM—-did I mention that we are supportive of Andrew’s plan?  Seriously, we love it, because he is following this simple formula for success.

The DO part of the plan is nothing without the thinking and the plan itself.  The PLAN is nothing if not well thought out.  The DO is the faith to move forward, even with risk and sometimes, in the face of unexpected challenges.

I don’t know what my son-in-law is going to think of next.  We may have to move if the HOA gets wind of the sheep he has surely ordered, or that Scottish Highland cow he’s been talking about.  Someday, I envision them living near the city, living out the dream they thought up, planned and implemented in our garage and basement, and making their mark.  Dreams are brought to reality through this very simple yet powerful process.

Now I have a giant plastic cow arriving soon—I am now entering the planning stage of this adventure. I’m teaching my grandson how to moo!  Soon we will enter Do!!